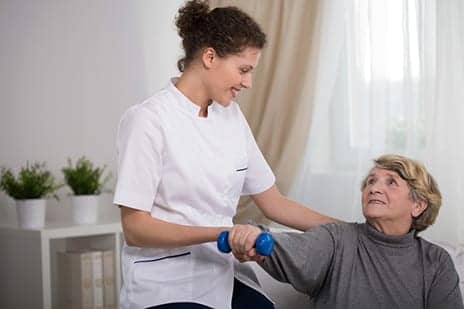 An in-home exercise program reduced subsequent falls in high-risk seniors by 36%, according the results of a 12-month clinical trial published recently in the Journal of the American Medical Association.

The study, conducted by UBC faculty of medicine researchers in partnership with the clinical team at the Falls Prevention Clinic at Vancouver General Hospital, found a reduction in fall rate and a small improvement in cognitive function in seniors who received strength and balance training through the clinical trial.

The study involved 344 adults aged 70 and older who had been referred to the Falls Prevention Clinic following a fall that had resulted in a visit to a medical facility, such as an emergency department. Participants had a history of falls, with an average of three prior falls per person, and generally had symptoms of frailty and limited mobility.

The participants were asked to perform a set of balance and resistance training exercises at home, using simple equipment such as free weights, a minimum of three times per week. Over the course of 6 months, a physical therapist made five home visits to prescribe exercises and ensure that exercises were done properly.

Those who completed the program were less likely to experience repeat falls and also improved in some markers of cognitive function, according to the researchers, in a media release from News-Medical.

“It is well known that exercise benefits older people in general, but what was special about this study group was that they are at very high risk for losing their independence — they had both mobility and cognitive impairments and another fall may mean the inability to live in their own homes. Many already had difficulty navigating public spaces independently,” says Liu-Ambrose, who holds a Canada Research Chair in Physical Activity, Mobility, and Cognitive Neuroscience.

“Older adults who experience falls that require medical attention are medically complex and at high risk for both morbidity and mortality, and we demonstrated that exercise is a practical and cost-effective intervention that can improve older peoples’ outcomes after a significant fall,” she adds, in the release.

Liu-Ambrose and her team at the Centre for Hip Health and Mobility are now looking at whether the exercise program resulted in reduced health care utilization and medical cost savings in this high-risk population.