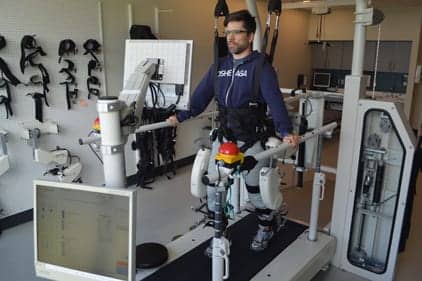 Researchers share their findings regarding the use of rehabilitation robots during gait training, in a recent study in Science Robotics. (Photo courtesy of Spaulding Rehabilitation Network)

Research on rehabilitative robots, which appeared in a recent issue of Science Robotics, suggests that gait modification using such robots occurs only if the forces the robot apply threaten the wearer’s walking ability.

In the study, Paolo Bonato, PhD, associate faculty member at the Wyss Institute for Biologically Inspired Engineering at Harvard University and Director of the Motion Analysis Laboratory at Spaulding Rehabilitation Hospital, and his team of scientists measured how test subjects’ gait changed in response to forces applied by a robotic exoskeleton as they walked on a treadmill.

From their observations, they suggest that the walkers adjusted their stride in response to a change in the length, but not the height, of their step, even when step height and length were disturbed at the same time, according to a news release from Spaulding Rehabilitation Network.

They believe that this discrepancy occurs because the central nervous system primarily relies on stability when determining how to adjust to a disruption in normal walking.

“Lifting your foot higher mid-stride doesn’t really make you that much less stable, whereas placing your foot closer or further away from your center of mass can really throw off your balance, so the body adjusts much more readily to that disturbance,” says Giacomo Severini, PhD, one of the three first authors of the paper, who is now an assistant professor at University College Dublin, per the release.

The brain appears to create an internal model of the body’s movement based on the environment and its normal gait, and effectively predicts each step. When reality differs from that model (ie, when a force is applied), the brain adjusts the body’s step length accordingly to compensate until the force is removed and the body recalibrates to the mental model, the release continues.

Bonato states that the study’s results provide insight into the way people adapt to external forces when walking in general. This is useful, he says, for clinicians when evaluating whether their patients will respond to clinical robotic interventions.

“The results of this research are very important from a clinical point of view,” agrees Ross Zafonte, DO, chairperson of the Department of Physical Medicine and Rehabilitation at HMS and senior vice president of medical affairs research and education at Spaulding Rehabilitation Hospital, in the release. “It is thanks to advances in our understanding of the interactions between robots and patients, such as the ones investigated in this study, that we can design effective robot-assisted gait therapy.”

“As the human population ages, robotics is playing an increasing role in their care and treatment,” adds Donald Ingber, MD, PhD, founding director of the Wyss Institute, who is also the Judah Folkman Professor of Vascular Biology at HMS and Boston Children’s Hospital, and Professor of Bioengineering at Harvard’s John A. Paulson School of Engineering and Applied Sciences (SEAS).

“Studying how the human body interacts with robots can not only teach us how to build better clinical rehabilitation machines, but also how our own human bodies work.” 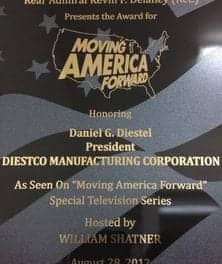 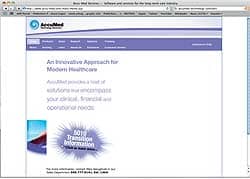 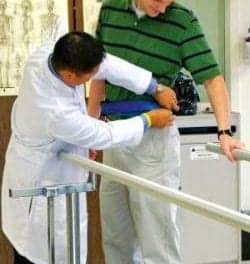 Assessing Balance and Gait After Stroke or Brain Injury

A Shift in Balance