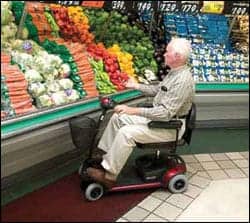 When it comes to fitting patients with a power mobility solution, most PTs look to power wACheelchairs, as these devices are often the best option to help clients within the home. But for patients who just need a little help navigating through their communities, a power scooter can be a perfect fit.

“If the patient/client has the ability to propel the scooter, they will be easily independent,” says Marilyn Moffat, PT, DPT, PhD, CSCS, FAPTA, full professor of physical therapy and director of the professional doctoral program (DPT) at New York University. “It certainly conserves energy.”

For example, one of Moffat’s patients is 60 years old and has had five major surgical interventions for scoliosis. Navigating New York City with a fused spine and major loss of lower-extremity muscle strength proved difficult for the patient, so now she uses a scooter to get where she needs to go. “The scooter has just liberated her,” Moffat says.

However, drastic changes in reimbursement for scooters—or power-operated vehicles (POVs), as they are known to the Centers for Medicare and Medicaid Services (CMS)—may be a deterrent for patients and their seating specialists. “Most of the time when I get folks that want a scooter specifically, what they’re considering is something to get them around in the community,” says Matthew Hart, OT, ATP, CDRS, an occupational therapist at Carle Therapy Services in Urbana, Ill. “A lot of times, the insurance doesn’t want to pay for that sort of thing.”

Last year, CMS established a new fee schedule for power mobility devices. Instead of having all power mobility devices continue to fall under the same K-11 code, the new fee schedule incorporates 64 new codes to better represent the spectrum of products available. With this, however, came stringent reimbursement cuts. “One of the items that was probably cut the most was the POV,” says Eric Sokol, JD, director of the Power Mobility Coalition (PMC), Washington, DC. “Power wheelchairs were cut about 27%, but the POVs were still cut by about 40%.”

The new rule makes it more difficult for suppliers to cover their costs, which means that suppliers may not support as many scooter options as they did previously. The likely result will be that POVs will lag behind power wheelchair use in the Medicare market. “The POV is sort of associated more with outside use, and in the Medicare program, the standard is whether it’s suitable in the home,” says Stephen Azia, counsel to the PMC and a principal at Eastwood and Azia, Washington, DC. “Generally, the power wheelchair is going to be a product that is more suitable in the home.”

Of course, even prior to the new rule, securing Medicare coverage for a POV was no easy task. To address CMS’s concerns about POV safety, a specialist used to have to sign off on the certificate of medical necessity before coverage would be granted. “The final rule of power mobility devices now withdraws that specialist requirement,” Azia says. “Even though the agency did say in the preamble to the rule that they would still recommend the use of the specialist, it’s no longer required.”

Another major hurdle for DME suppliers is competitive bidding, which is set to go into effect in 10 metropolitan statistical areas (MSAs) on April 1, 2008. The program will likely force supplier consolidation nationwide. “You can look at it like a Faustian bargain where the suppliers are offering to the government their lowest reimbursement in exchange for a portion of the market in that MSA,” Sokol says. “Suppliers who make that bargain will hopefully be OK. And suppliers who aren’t contracted—it’s going to be tough for them to remain in business unless they have ancillary revenue streams outside the Medicare market.”

The bids submitted under competitive bidding cannot exceed the 2007 fee schedule and will be locked in for 3 years. This means that there will be no updates for inflation or other costs such as soaring gas prices. Out of necessity, suppliers will be looking to carry cheaper products, and there are already less expensive options available from manufacturers in Southeast Asia. “For beneficiaries, that means that the quality of the product is going to be a lot less, because the products that are produced overseas tend to be less durable and not intended for long-term usage,” Sokol says. “Even though they’re power wheelchairs, they don’t have the power in their drive train to even go over minor inclines and might even have problems going over door jams.”

These Medicare trends may inspire patients to pay cash for scooters from retailers, although Hart is skeptical that this will become a widespread solution. “Most people would rather not pay cash,” he says. In his area, a store selling scooters and power wheelchairs for cash set up shop in a local [department store]. Hart says that the prices were good, but the shop did not stay open long. “They were only up 2 months and then they closed up shop, because they probably didn’t get enough business,” he says.

However, there will likely be a surge in the retail market in light of the recent cuts. “I don’t know about a thriving retail market, but I think there will be at least a strong retail market given the coverage determination under Medicare is getting more stringent,” Sokol says. “I think the price points are fairly reasonable depending on which product you get, but there are POVs that are $1,000 or less, and you can even go over the Web and get products that way, too.”

For scooter users, a variety of accessories are available to make the ride more comfortable, while addressing such basic concerns as:

Despite Medicare cuts, power mobility solutions still save patients thousands of dollars annually. With health care economists, the PMC contributed to a study that found that Medicare beneficiaries with access to power mobility saved $11,000 annually in health care expenses, such as hospital visits and home health services, compared to Medicare beneficiaries without power mobility devices. “Just keeping someone out of a nursing home for a month is a cost savings anywhere from $6,000 to $10,000, depending on where you are,” Sokol says.

Paying cash for a scooter may not be widely popular, but more patients are considering retail options to preserve their mobility. No matter where they buy their equipment, however, patients should know what they are looking for before they sign the dotted line.

Ideally, patients will consult with their PTs or other seating specialists before making the purchase. “PTs have got to look at all the facets that are necessary for the patient’s/client’s lifestyle,” Moffat says. This means addressing multiple factors, including how far patients have to travel in the scooter, whether they will use the scooter just to get from place to place, or if they also will need it inside their places of business, and what types of transportation they use.

“There are many city buses and other forms of public transportation that allow scooter and wheelchair accessibility,” Moffat says. “You need a relatively small turning radius in order to appropriately maneuver those spaces.”

PTs should determine if their patients need a four-wheel scooter, which is more stable, or a three-wheel option. The wheel base needs to be steady to allow them to traverse different types of terrain, and the scooter should have the appropriate weight so that there is no danger of tipping. It also must be able to fit through standard door frames. “It should have a cushioned seat so that they are comfortable for bumpy or long journeys,” Moffat says, adding that special cushions can be ordered for patients with diminution of sensation. For easier transfer into and out of the seat, patients should look for armrests that can raise and lower, as well as for seats that pivot to allow easy exit. They also need proper safety equipment, such as a seat belt, lights, and a horn.

Of course, scooters are not for everyone. Hart says that scooters generally do not have the variety of adjustable seating options that many of his patients require. “If we get a patient who has MS or a stroke, and they’re having postural problems where they can’t sit up straight, we can do a lot more with a rehab seat on a power wheelchair than just a little seat on a scooter,” Hart says, adding that scooters are often not appropriate for patients who weigh more than 250 pounds as well.

Still, scooters are a good fit for patients who just need help with longer distances. Hart mentions that some senior apartment complexes incorporate a central dining area that can be a fair distance away from the residents’ living spaces. “They may be able to get around walking in their apartment just fine, but when it’s a quarter of a mile to get to their dining room, they certainly can’t walk all that way,” he says. “So they may use their scooter to drive down to the dining room for their meals.”

When purchasing a scooter for cash, patients may be tempted by the lower costs for used equipment, but Hart recommends being extremely cautious when going this route. “You’re going to get better prices for used equipment,” he says. “My only problem is you never know what you’re buying.” Some local vendors will sell power mobility devices on consignment, and Hart suggests that this is probably the safest bet when purchasing used equipment so that patients make sure it is a good fit before bringing the device home.

No matter where patients choose to buy their scooters, the most important thing is testing it out first to ensure it is the proper fit. “One wouldn’t buy a car without getting in and out of it, and one certainly wouldn’t buy a wheelchair for long-term use without making sure all dimensions are appropriate,” Moffat says. “If [a scooter] is something that your patient/client will be using on a long-term basis, then they must have one that is comfortable, secure, and totally correct for their body.” 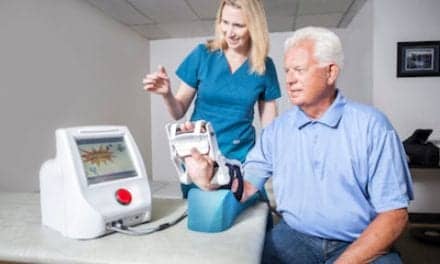 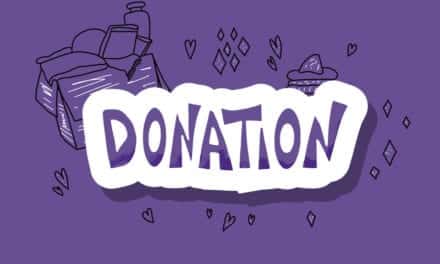