The study, which according to a news release from the Center for BrainHealth was reportedly the first of its kind, was funded by the Department of Defense and was conducted by an interdisciplinary team of cognitive neuroscientists, rehabilitation specialists, and neuroimaging experts from the Center, located at The University of Texas at Dallas.

“Veterans and others who have sustained traumatic brain injuries often experience persistent cognitive and psychological difficulties, such as depression and/or post-traumatic stress disorder, which hinder day-to-day life activities,” says Sandra Bond Chapman, PhD, founder and chief director of the Center for BrainHealth and one of the study’s principal investigators, per the release.

“This study shows that strategy-based cognitive training focusing on abstract and innovative thinking not only improves cognitive areas critical to everyday life success but also improves brain blood flow to key regions of the brain and lessens depressive and stress-related symptoms,” she continues.

In the study, 60 individuals between the ages of 19 and 65 who had sustained at least one TBI—with more than two-thirds of them sustaining one more than 10 years ago—were randomly assigned to either of two groups: one to receive strategy-based brain training focused on complex abstraction and innovation, or one to receive an educational, information-based program about how the brain works, the release explains.

Participants in both groups received 18 hours of training completed in 12 group sessions over an 8-week time frame. They also underwent extensive cognitive assessments and MRIs, and were measured for symptoms of depression and symptoms of post-traumatic stress disorder, according to the release.

Per the release, participants in the group who received the strategy-based cognitive training improved their complex abstraction scores by more than 20% and their memory scores by more than 30%. They also reported a 60% reduction in their depressive symptoms, as well as an almost 40% reduction in their symptoms related to post-traumatic stress disorder. Also, their regional brain blood flow to the frontal lobe, anterior cingulate, and precuneus was also found to increase significantly following the strategy-based training as compared to the active comparison group.

“Previously, reduction in precuneus blood flow has been linked to severity of traumatic brain injury and symptoms of PTSD,” explains Daniel Krawczyk, PhD, associate professor of cognitive neuroscience and cognitive psychology at the Center for BrainHealth and another of the study’s principal investigators.

“Our results show that following the strategy-based training, blood flow increased more than 25% to this region, implying the brain is undergoing changes suggestive of improved neural health,” he continues.

“Enhanced neural health of the frontal region has been associated with increased abstract thinking, the anterior cingulate to superior cognitive performance, and the precuneus to emotional regulation of stress and severity of brain injury symptoms,” Krawczyk also notes, in the release.

Per the release, it is suggested that the study participants’ improved abstract thinking and improved executive functioning appear to help them to down-regulate their emotional reactions, resulting in better moods and fewer stress symptoms.

Chapman says in the release that these benefits continued 3 to 4 months following the cognitive training, suggesting that the study participants continued to improve after the training ended.

“The benefits of the strategy-based training were experienced months and years after injury,” she explains, “suggesting that brain injuries should be treated more like a chronic health condition rather than a single short-term event.” 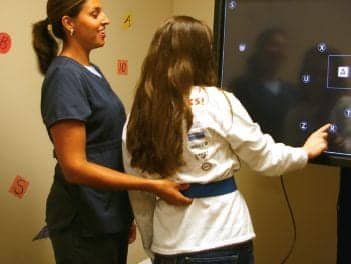