Performance Health reports that researchers have investigated the effectiveness of the First Step to Active Health exercise program, which uses a red Thera-Band Exercise Band as an alternative to high-cost equipment, to address barriers leading to physical inactivity in older adults.

According to a recent news release, the program included group sessions in the participants’ apartment buildings and a home exercise component. During the study, Pamela Toto, PhD, OT, and a team of additional researchers reportedly assessed a 10-week exercise program with 15 community-dwelling older adults from low-income households in Pittsburgh.

Each participant was given a First Step to Active Health kit, which included a Thera-Band elastic resistance band. Researchers note that the exercise protocol included 5 to 10 minutes of cardiovascular warm-up, 11 upper-body strengthening exercises, and 11 lower-body strengthening exercises. The protocol also included six balance training exercises using a chair for support, and eight flexibility exercises as cool-down, the release notes. Sets, repetitions, and resistance were increased as the program progressed.

According to the study’s results, 70% of participants completed the First Step program and the adherence rate for the entire group was at 90%.

“We are very pleased with the results of this study that showed that seniors significantly improved their ADL measures and functional fitness on all six components of the Senior Fitness Test,” Toto says.

Phil Page, PhD, PT, ATC, director of clinical education and research for Performance Health, responds to the results, adding that, “Thera-Band products have been successfully used in many published studies of older adult exercise programs,” and can serve as an option for therapists, physicians, and researchers when addressing the issues of inactivity and compliance with exercise programs.

The researchers ultimately conclude that the First Step to Active Health program’s effectiveness parallels that of a high-intensity exercise protocols and high-cost exercise equipment. “Our study indicates that gains in physical performance can also be achieved with low-cost equipment and an exercise program of a lower intensity, which may be more acceptable and sustainable in this population,” Toto adds. 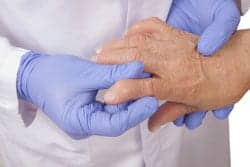