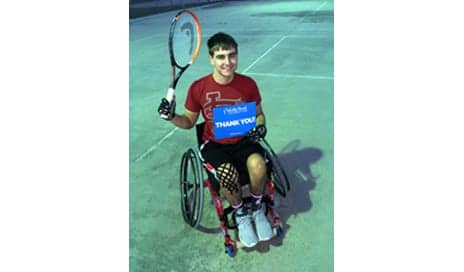 Pictured is Dylan Wells from Axtell, Nebraska, with the tennis chair he purchased in 2016 via the Adaptive Sports Equipment Program grant he received from the Kelly Brush Foundation.

The Kelly Brush Foundation has awarded $275,000 in adaptive sports grants and partnerships in 2016, according to a company announcement.

“We received more applications than ever before from adaptive athletes seeking to improve the quality of their lives and from organizations focused on making ski racing safer,” says Executive Director Zeke Davisson in a media release.

“As the Kelly Brush Foundation grows we are able to do more, and we are also seeing demand grow. This encourages and motivates us to do even more to meet our mission,” he adds.

In addition, the foundation allocated $45,000 for Adaptive Sports Partnerships, to support a new initiative called Path 2 Active. The initiative creates partnerships with adaptive sports programs and outpatient rehabilitation hospitals to make the path to returning to an active lifestyle as easy and personalized as possible.

The Foundation’s fundraising effort is supported by the foundation’s signature event, the Kelly Brush Ride. This year’s ride, which took place in September, attracted more than 700 cyclists and 30 handcyclists, and raised more than $425,000.

Next year’s ride is scheduled to take place September 9 in Middlebury, Vt.