Researchers from Purdue University, West Lafayette, Ind, have developed a new technology that helps Parkinson’s patients overcome the tendency to speak too quietly by playing a recording of ambient sound, which resembles the noisy chatter of a restaurant full of patrons, according to a statement released by the university.

"People with Parkinson’s disease commonly have voice and speech problems," said Jessica Huber, PhD, an associate professor in Purdue’s Department of Speech, Language and Hearing Sciences, in the statement. "At some point in their disease they will have some form of voice or speech disorder that generally occurs a little later in the disease."

"A major therapy is to get people to speak louder, which also may cause them to articulate more clearly," Huber said.

The most common therapy, the Lee Silverman voice treatment program, trains patients to speak louder in 1-hour sessions four days a week for a month.

"Some Parkinson’s patients do great with this approach, but others do not," Huber said. "They forget to keep speaking louder the minute they have left the therapy room. Lee Silverman tends to work less for people with later stages of disease or those who have some cognitive decline.

“So I wanted to know whether there was an easier way to cue people during therapy, rather than telling them, ‘Try to be twice as loud,’ or ‘Try to focus on this sound meter and achieve this loudness,’" she said.

Huber used a new approach: The patients were asked to speak louder while a recording of background "multitalker babble noise" was played. The noise is essentially the sound of a restaurant full of patrons, but without the clattering silverware and clinking glasses.

"They had an easier time getting louder when I had the noise in the room," she said. "Ordinarily, when I asked them to be twice as loud they would say they couldn’t. They couldn’t speak 10 decibels louder, but when I turned on the babble noise, they spoke over 10 decibels louder."

"You go into a loud room at a party and you talk louder without even realizing it," Huber said. "We’ve all had the experience where the room suddenly gets quiet and you’re still shouting but you didn’t know you were."

Huber created a new electronic technology using this principle. The voice-activated device automatically plays the background babble when the person begins to speak. A sensor placed on the neck detects that the person has begun to speak and tells the device to play the babble through an earpiece worn by the patient.

"I got the idea that if we train them with a natural cue in their everyday environment, we will probably get better results," she said. "We ask them to wear the system for about 4 hours a day as they go about their daily routine."

"This sensor is crucial because it is essential that the background babble noise only turn on when the subject talks," Huber said.

The device prototype was built by engineering resources manager Jim Jones and senior research engineer Kirk Foster, both in the Weldon School.

"Their speech changes significantly," said Huber, who is working with Meghan Darling, a doctoral student in speech, language and hearing sciences. "This is beneficial also because it trains them in their everyday environment—in their homes, with their spouses, in their churches, in their social groups."

Huber determined the system works by measuring how much louder patients talked while on the device and without the device after eight weeks of training.
The researchers also are interested in examining the physiological changes elicited by the device. Patients wear a mask and sensors in elastic bands placed around the rib cage to precisely recording respiratory, laryngeal and articulatory data.

The researchers also will test how well the system works by having people who are not speech pathologists listen to the patients pronouncing words that could be easily confused with other words.

Researchers will work in the future with patients at the Rehabilitation Institute of Indianapolis. Further research is needed to determine whether patients continue speaking louder when they are not wearing the device. The system could be further developed to use rechargeable batteries, Huber said.

The research is funded by the National Institutes of Health. Purdue has filed a provisional patent on the concept.

The researchers are seeking Parkinson’s disease patients to participate in the study. To participate, or for more information, contact Huber at (765) 494-3796, or via e-mail ([email protected]). 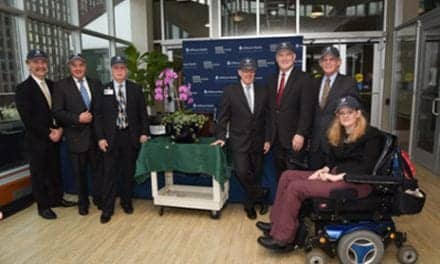