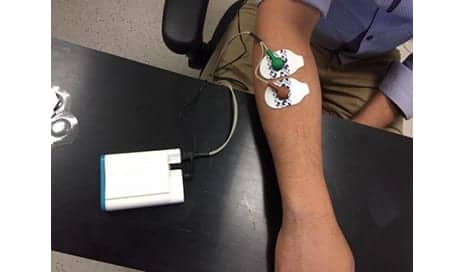 Neuroscience researchers are beginning a clinical trial, involving 150 stroke patients, of a new electronic device that they hope could help recover movement and control of the patients’ hands.

The researchers from Newcastle University are working with colleagues at the Institute of Neurosciences, Kolkata, India, on the trial, which aims to see whether the device could lead to improved hand and arm control.

“We have developed a miniaturized device which delivers an audible click followed by a weak electric shock to the arm muscle to strengthen the brain’s connections. This means the stroke patients in the trial are wearing an earpiece and a pad on the arm, each linked by wires to the device so that the click and shock can be continually delivered to them,” explains Stuart Baker, professor of Movement Neuroscience at Newcastle University, who is leading the trial, in a media release from Newcastle University.

“We think that if they wear this for 4 hours a day we will be able to see a permanent improvement in their extensor muscle connections which will help them gain control on their hand,” adds Baker, senior author of a study about the device, published recently in The Journal of Neuroscience.

This study is the researchers’ report regarding their testing of the device on primates and healthy human participants.

In the study, the release explains, the Newcastle University researchers report how they pair a click in a headphone with an electric shock to a muscle to induce the changes in connections either strengthening or weakening reflexes depending on the sequence selected. They demonstrated that wearing the portable electronic device for seven hours strengthened the signal pathway in more than half of the subjects (15 out of 25).

“We would never have thought of using audible clicks unless we had the recordings from primates to show us that this might work. Furthermore, it is our earlier work in primates which shows that the connections we are changing are definitely involved in stroke recovery,” Baker states.