When it Comes to Stroke Recovery, Who You See Matters 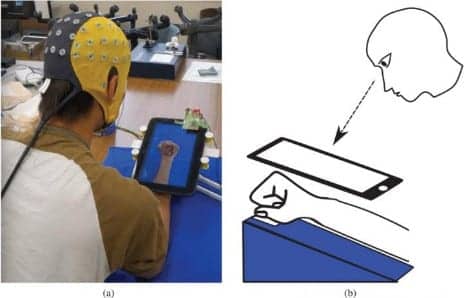 (a) Top view of the experiment. A tablet monitor was placed over the participant’s right forearms on the desk in front of them. (b) Diagrammatic view of the experiment from the left. There is a space to open the hand, which made it easier to imagine the opening-clench hand movement. (Photo courtesy of Toshihisa Tanaka, TUAT)

For stroke patients, observing their own hand movements in a video-assisted therapy – as opposed to someone else’s hand – could enhance brain activity and speed up rehabilitation, according to researchers.

The scientists, from Tokyo University of Agriculture and Technology (TUAT), published their findings in IEEE Transactions on Neural Systems and Rehabilitation Engineering.

To promote brain plasticity, stroke patients may incorporate a technique called motor imagery in their therapy. Motor imagery allows a participant to mentally simulate a given action by imagining themselves going through the motions of performing that activity. This therapy may be enhanced by a brain-computer interface technology, which detects and records the patients’ motor intention while they observe the action of their own hand or the hand of another person, a media release from Tokyo University of Agriculture and Technology explains.

“We set out to determine whether it makes a difference if the participant is observing their own hand or that of another person while they’re imagining themselves performing the task,” says co-author Toshihisa Tanaka, a professor in the Department of Electrical and Electrical Engineering at TUAT in Japan and a researcher at the RIKEN Center for Brain Science and the RIKEN Center for Advanced Intelligent Project.

The researchers monitored brain activity of 15 healthy right-handed male participants under three different scenarios. In the first scenario, participants were asked to imagine their hand moving in synchrony with hand movements being displayed in a video clip showing their own hand performing the task, together with corresponding voice cues.

Using electroencephalography (EEG), brain activity of the participants was observed as they performed each task.

The team found meaningful differences in EEG measurements when participants were observing their own hand movement and that of another person. The findings suggest that, in order for motor imagery-based therapy to be most effective, video footage of a patient’s own hand should be used.

“Visual tasks where a patient observes their own hand movement can be incorporated into brain-computer interface technology used for stroke rehabilitation that estimates a patient’s motor intention from variations in brain activity, as it can give the patient both visual and sense of movement feedback,” Tanaka explains.