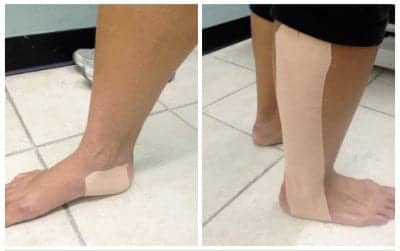 The application of therapeutic taping to the lateral portion of the lower leg can help increase medial/lateral response of the ankle, improving balance performance and preventing falls in MS patients.

Persons with multiple sclerosis (MS) are being referred to physical therapy for remediation of mobility impairments in greater numbers than ever. However, due to the multifactorial nature of MS impairments and functional limitations, there is a limited number of treatment tools physical therapists can use. This is in contrast to other neurologic conditions such as stroke and spinal cord injury, for which a large amount of literature is available to guide therapists.

Interventions such as functional electric stimulation,1 intermittent walking,2 and body weight-supported treadmill training3 have all been studied by PTs and found to be effective means of treatment of movement pathology in MS. Interventions that have been used previously by physical therapists to address orthopedic injuries are now being looked at to address impairments associated with MS. Therapeutic taping (TT), which is defined as taping over and around muscles in order to assist and give support or to prevent overcontraction, has been used extensively to treat musculoskeletal pain and dysfunction associated with orthopedic injuries.4-6 New evidence suggests that therapeutic taping also may be effective in treating MS-related movement pathology.

In the clinic, a therapist may use the hands to restore normal movement, decrease pain by manipulating soft tissue, provide tactile cues to a joint, or facilitate a muscle contraction. Outside the clinic, TT can address the same issues by aligning fascial tissues, increasing space by lifting the fascia, and the removal of edema.7-11 TT essentially can do what a therapist’s hands do, but when the patient is not in the clinical setting. The use of TT in patients with neurologic dysfunction has not been as well studied. Jaraczewska and Long discussed the use of therapeutic taping in addressing dysfunction of the upper extremity in hemiplegia.12 Simsek et al investigated the use of TT in children with cerebral palsy. They found an increase in sitting posture control in the group that received TT and physical therapy compared to the group that received only physical therapy.13

Although MS is considered a neurologic disease, it can often result in orthopedic dysfunction caused by weakness, spasticity, and poor motor control, and the use of TT to treat orthopedic dysfunction has been well documented. Chen et al14 demonstrated that patients with vastus medialis oblique (VMO) dysfunction treated with TT had earlier muscular activation than controls. It was postulated that the increase in muscular activity was due to the increase in tactile input hypothetically leading to an increase in excitation from the central nervous system.15 Hsu et al examined the effects of TT on subjects with decreased scapular motion and shoulder impingement. Lower trapezius strength increased in the TT group by 2.0 ± 3.9 pounds, while in the placebo group strength decreased by -0.7 ± 3.3 pounds.16 These studies indicate that TT may result in improved motor control and increased force output in weakened structures. These symptoms are commonly seen in patients with MS, and therefore they may benefit from similar interventions. Movement dysfunction due to proprioceptive loss is a common finding in MS. TT also may be effective in enhancing proprioception.17 Simoneau et al found the use of TT increased ankle proprioception in a study of 20 healthy males. TT was applied to the anterior and posterior talocrural joint. Joint ankle position was analyzed before and after the application of TT.15 It was postulated that the use of TT provides an external cutaneous stimulus that enhances proprioception. TT may therefore be an effective means of improving balance in persons with MS by improving proprioceptive output.

A single study thus far has looked at the use of TT in MS. Cortesi et al18 examined the benefits of TT in improving balance in the MS population. Subjects’ balance, as measured by anterior/posterior and medial/lateral sway, was assessed before and after a 2-day application of TT to the calves. The results revealed that balance improved in the anterior and posterior plane, but not the medial and lateral plane. As falls due to balance loss are a common cause of morbidity and mortality in MS, this intervention may be an effective means of addressing this issue. The authors have used similar principles from the Cortesi article, applying TT to the lateral portion of the lower leg to help increase proprioceptive input in the medial and lateral plane.

We have observed that this has increased medial/lateral response of the ankle, and thus increases balance performance. Simply assessing the Romberg test before and after the application of TT will determine the efficacy of the TT. Similar approaches can be used by applying TT to the hip if the clinician believes a person’s poor balance is caused by an inadequate hip strategy response.

It has been our experience that application of TT can be used to enhance muscular recruitment and force output in the MS population as well. Dropfoot, a frequently seen complication of MS, is often caused by weakness or difficulty with activation of the dorsiflexors. TT is particular useful in those individuals who have some strength in dorsiflexion, but not adequate to raise the foot in gait. We have noted TT applied in a proximal to distal fashion on the tibialis anterior aided individuals in retraining dorsiflexion during gait. We also have found the use of TT on the gluteals to enhance hip extension during gait. Similar findings have been found in the hemiplegic population by Kilbreath et al.19 The use of TT can help support a muscle if applied in a distal to proximal fashion. This is often helpful if a particular muscle is injured and needs the support of the tape to allow the structure to shorten. A similar technique can be used in the MS population if a particular muscle or muscle group is found to be spastic. Theoretically, if a muscle is kept in a shortened position, it will not set off the stretch receptors of the muscle that causes the hypertonic state. Spasticity is a common finding in MS, and often limits gait and balance. Spasticity is often found in the quadriceps and can prevent knee flexion during the swing phase of gait. We have found clinically that an application of TT, distal to proximal on spastic quadriceps, helps inhibit the extensor tone and improves gait. This is further enhanced if a bout of stretching has been performed on the quadriceps prior to the application of TT. 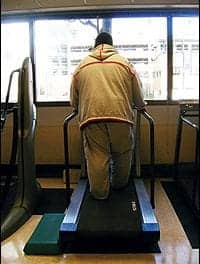 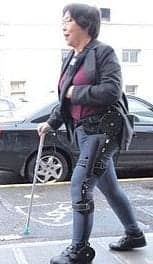