Researchers from Amen Clinics, UCLA, Thomas Jefferson University, and University of British Columbia performed the study, which was published recently in the journal PLOS ONE.

Lead author Daniel Amen, MD, a board-certified psychiatrist and founder of Amen Clinics, says in the release that this study could help people who suffer from PTSD, TBI, or both, because “getting the right diagnosis is critical to getting the right help.”

“The wrong diagnosis leads to the wrong treatment and can hurt patients. Having a tool to better understand and separate them will help eliminate the guesswork that can lead clinicians down ineffective treatment paths,” he continues in the release.

The release explains that Amen and his research team examined more than 20,000 brain scans using SPECT. They measured blood flow and activity in 128 different brain regions while study subjects were at rest and while doing a mental task.

The researchers then used a mathematical model to determine if the scans could tell TBI and PTSD apart in persons with both ailments. This model was then applied to separate groups with and without other mental health conditions with predictive sensitivity of SPECT in distinguishing PTSD from TBI of 80% to 100%, per the release.

The researchers explain in the study, according to the release, that SPECT can tell TBI and PTSD apart because these disorders affect the brain in different ways. TBI involves damage to the brain from direct blows or blast injuries, leading to reduced brain activity and blood flow.

PTSD, on the other hand, involves hyperactive reactions to different stimuli, leading to brain scan patterns where blood flow is abnormally higher compared to TBI or normal health.

Amen notes in the release that much more work remains to be done. “The key contribution of this paper is a reliable biomarker to aid in proper diagnosis. Future work will focus on adapting imaging to hone in on biomarkers that predict and improve patient outcomes,” he says. 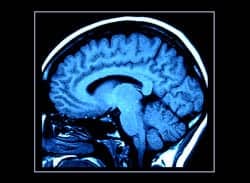