Using the Biopsychosocial Model of Pain

Physical therapists have a unique role in treating pain, yet the complexities of pain can confound even the most experienced physical therapist. Pain is not simple, and understanding its origins, its nature, and how to treat it can require a sophisticated approach. The aim of this article is to shine light on how pain theory has evolved over time, to help therapists reflect on their treatment strategies and how to better explain pain to their patients.

Pain, as defined by the International Association for the Study of Pain, is, “An unpleasant sensory and emotional experience associated with actual or potential tissue damage, or described in terms of such damage.” This definition fits well within the biopsychosocial model used today. The biopsychosocial model acknowledges the patient’s biology, cognitive components and social context, and is particularly helpful in examining chronic pain. The contemporary view of pain is that it is not just influenced by these multiple systems but rather its very existence is created by them. Just like a movement or a thought, pain is an output generated by the brain and spinal cord, serving as a protective mechanism.1

Types of pain commonly treated by physical therapists include primary nociceptive pain, microtrauma from repetitive use and irritation, nerve root and peripheral nerve pain following a radicular or nerve distribution, central pain syndrome, and chronic pain often associated with adaptations in both the peripheral and central nervous system. Peripheral adaptations occur when nociceptors send reflexive axonal signals to the site of injury before entering the dorsal horn. This action enhances the inflammatory response and creates increased redness and pain surrounding the injury site. Mechanoreceptors, which are optimally responsive to touch, become sensitive to heat and pain, producing what is known as allodynia.

Central sensitization occurs in the spinal cord when an increased number of spinal neurons become active. This, in effect, lowers the threshold for pain and causes a wider distribution of pain. The complex network of neurons in the spinal cord can send messages up and down multiple levels and to the opposite side of the body. The brain’s somatosensory cortex can become somewhat blurred and imprecise. Central sensitization can therefore cause patients to sense pain in remote sites from the initial injury including the opposite side of the body.

The biopsychosocial model of pain appreciates how multiple biological systems are constantly at work: pro-inflammatory, anti-inflammatory, stress regulation, autonomic, endocrine, and immune. Thoughts, affect, emotions and external events orchestrated with biological processes all contribute to the perception of pain regardless of what type of pain someone has. How did we get to such a complex understanding of pain? A brief historical review follows.

From the time of Hippocrates in the 4th century BCE, physicians began studying pain for its distinctive qualities and primary role in diagnosing disease. Pain indicated an imbalance in the body’s humors and a change in an organ’s temperament. There was no consideration for emotional or cognitive influences on the perception of pain. In the Middle Ages through the Renaissance period, the scientific study of pain was shadowed by Christianity. A person in pain was believed to be atoning for his sins. In the mid 1600s the French philosopher Rene Descartes proposed a pain theory while appeasing the church, with his construct of dualism. Cartesian dualism viewed the body and mind/soul (used interchangeably) as distinct entities in form and function. The body as a machine could operate independently, while the mind/soul was under spiritual direction. Descartes was not rigid in his thinking, however, and strongly believed the union of the body and mind was essential in perceiving pain.2 The separation of physical and psychological illness in our culture has a foundation in dualism.

The specificity theory developed by Charles Bell in 1811 described the abundance of sensory receptors in the skin with neural pathways that would transmit signals to the brain. These receptors were distinct for hot, cold, touch and pain. The theory described thermal and mechanical receptive fields, specialized nerve endings for pain, and appreciated the brain as a complex structure. The pattern theory presented by John Paul Nafe in 1929 disputed the idea of specific sensory receptors in the skin and instead proposed patterns of sensations that the brain would recognize and perceive as pain. The pattern theory was discredited once it was proven that different receptors do in fact exist.

The gate control theory of pain described by Melzak and Hall in 1965 was a breakthrough theory demonstrating how pain was modulated by the central nervous system.

The gate control theory mapped out how a nociceptor in the periphery synapses with a neuron in the spinal cord to send a pain signal to the brain. Touch receptors send signals through fast Alpha fibers to the dorsal horn, activate an interneuron which then inhibits the signals from beta slower Alpha and C fibers carrying nociceptive input. Input from the brain descends into the delta dorsal horn, activates interneurons and either ramps up or dampens the pain signal.

The neuromatrix theory developed by Melzak and Casey in 1990 broadened the gate control theory with new insights into the increased role of the cortex, limbic system and thalamus. They used the term “Neurosignatures” to refer to genetically patterned responses which were influenced by three systems: sensory-discriminative, affective-motivational and evaluative-cognitive. Pain was the outcome of the interplay of all three systems.

The biopsychosocial model, originally proposed by George Engel in the 1960s, challenged the biomedical model for its narrow view of illness exclusively through a biological lens. Engel believed a more inclusive approach of psychological and social factors was needed to explain the paradox of patients who felt ill in the absence of disease or of patients who felt well despite abnormal clinical findings. He believed the biomedical approach was grossly inadequate in treating patients.3 Modern pain theory has adopted the biopsychosocial approach in treating the whole patient. The patient’s thoughts, emotions, self-efficacy, relationship with providers and insurance companies, family support, cultural and religious influences all contribute to the patient’s pain. Physical therapists who work within a biopsychosocial framework are likely to have the most success with patient outcomes.

Thermal, topical, electrophysical agents, manual therapy, exercise and education offer a wide set of options for therapists and patients to treat pain. Patients are often curious how a particular modality works or if a treatment could potentially make their pain worse. Therapists with a sound understanding of pain theory are better equipped to choose which methods to use and how to explain pain to their patients.

Thermal agents: heat or ice, have an effect on nociception and inflammation. Heat will cause vasodilation, improve blood flow, relax skeletal muscle and may sensitize mechanoreceptors to heat, thereby reducing the perception of pain. Cold will cause vasoconstriction, reduce swelling, decrease sensory and motor nerve conduction velocity, and may increase the pain threshold of nociceptors.

Topical agents deliver analgesic or anesthetic ingredients through creams, oils, gels, sprays, or patches to a local area of pain. Topicals are distinct from transdermal medications in that they do not have an intended systemic action. Some examples of active ingredients include non-steroidal anti-inflammatories (NSAIDs), counter-irritants such as salicylate, menthol or camphor, capsaicin, lidocaine, and various herbal remedies.4 NSAIDs inhibit pro-inflammatory enzymes, counter-irritants cause a warming sensation on the skin, lessening the awareness of pain. Capsaicin, which causes a burning, prickling sensation, ultimately leads to reversible damage to nociceptors. Lidocaine blocks nerve impulses and decreases peripheral nociceptor sensitization. Various herbs can have either a cooling or heating effect on the skin.

Electrophysical agents include electrical, mechanical, or electromagnetic energy delivered to a target tissue. Transcutaneous electrical neural stimulation (TENS) passed over the skin will excite various touch receptors, which will have an inhibitory effect on nociceptive pathways in the spinal cord via the gate control mechanism. TENS delivered in lower frequencies may also increase the endogenous opioid enkephalin in the spinal cord, resulting in pain relief after TENS is removed. Ultrasound (US), and light amplification by stimulated emission of radiation (LASER) have both thermal and non-thermal effects; however, it is the non-thermal effects on tissue healing which may be most therapeutic.5

Manual therapy through touch, vibration, stretch and pressure can stimulate mechanoreceptors, release restrictions, and decompress sensitive structures. The analgesic effect of touch reinforces the patient-therapist relationship, which is an important dynamic under the biopsychosocial model.

Exercise helps to lubricate joints, reduce stiffness and improve mobility. Strengthening and dynamic stabilization can enhance function and reduce pain by developing muscle and bone support. Exercises of low intensity that are progressed in a graded manner may have the best analgesic effects. Cardiovascular exercise has systemic effects throughout the body in addition to elevating mood and reducing anxiety.

Education is an essential component of any physical therapy treatment. Physical therapists are accustomed to educating patients on posture, biomechanics, and exercise, but may be less comfortable discussing pain, especially chronic pain. Patients recuperating from injuries often lack medical knowledge and have unrealistic expectations. Therapists can help patients keep their pain in perspective by reinforcing the role of pain and inflammation in the recovery process and reviewing the phases of healing.

Educating patients in chronic pain can be challenging. Patients may assume that their body is damaged and avoid movement for fear of generating more pain or creating further damage. Rather than a “fixer” of pain, the therapist can move into a role of mentor and educator. Butler and Moseley, in their book Explain Pain Supercharged, provide metaphors and novellas that can reshape how patients think about their pain. If the nervous system can wire itself to produce hyperalgesia, then it should be able to rewire itself to dampen pain through changes in thoughts and behaviors.

The current biopsychosocial model of pain provides an inclusive approach to treating the whole patient. A sound foundation in pain theory, a multitude of treatment options and a focus on education can help the therapist treat patients with acute and chronic pain. RM

Karen Danchalski, DPT, received her bachelor of science in physical therapy from Indiana University in 1998, her transitional doctorate of physical therapy from Widener University in 2006, and became a certified Stott Pilates instructor in 2012. Danchalski currently practices in home health care with Northwell and in a private orthopedic clinic with Sparacio Physical Therapy. For more information, contact [email protected].

[This article was published in Rehab Management’s July/August print issue under the title, “Treating Pain.”] 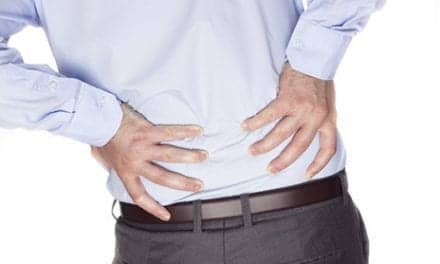