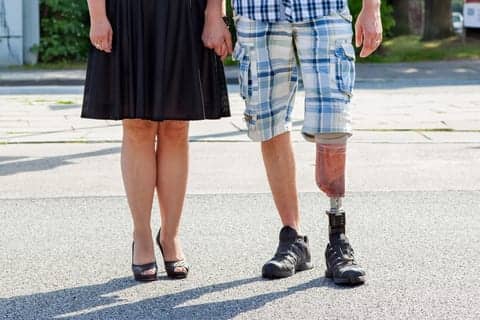 Amputees are being encouraged to wear their prostheses in public and “show their mettle” by posting images of their outings on a special Facebook page set up by the Amputee Coalition of America (ACA) Manassas, Va. The page, and the request for images, are part of awareness efforts being made during April, which is Limb Loss Awareness Month.
According to a media release from the ACA, the month of April will be filled with events sponsored by a range of advocacy and professional organizations targeted at raising limb loss awareness. Among the organizations are amputee support groups, veterans, prosthetists, rehabilitation centers and individuals who are affected by limb loss.
Susan Stout, Amputee Coalition president and chief executive officer, states in the ACA’s media release, “Our goals for Limb Loss Awareness Month are to heighten public awareness about limb loss and increase people’s understanding of prevention – especially those most at risk.”
The ACA reports that during april events across the United States will help amputees “show their mettle” and raise limb loss awareness by planning and holding walk/run/roll events in their communities to benefit the Coalition’s mission to empower people affected by limb loss to achieve their full potential. On Saturday, April 25, the Coalition invites any amputee who is comfortable with “showing their mettle” to “show their metal” by wearing their prosthesis in public and posting it on our Facebook page.
Dan Berschinski, ACA board chair notes, “The concept is simple – to show your ‘mettle,’ the ability to cope well with difficulties or to face a demanding situation in a spirited and resilient ways by those with limb loss showing their ‘metal’ prosthetic device or wheelchair. We are also encouraging all amputees (depending on their comfort level) to post photos of themselves wearing their prosthesis (or just living their daily lives if they do not use an assistive device) on our Show Your Mettle for Limb Loss Awareness Month event page on Facebook throughout April.
According to the ACA media release, statistics show that those at greatest risk are African Americans, those from Hispanic descent, Americans that have a vascular disease (diabetes, PAD) and smokers.
[Source: Amputee Coalition of America]