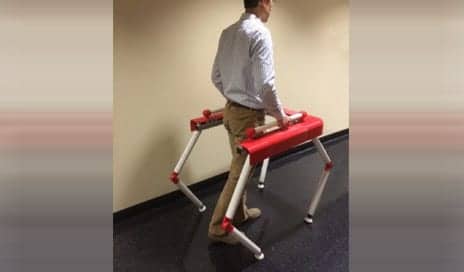 The Smart Walker is part of a $2.2 million funding package from the NIH that aims to help the elderly move easily and remain independent. (Image by Xiangrong Shen, University of Alabama)

As part of the National Robotics Initiative (NRI), the National Institutes of Health (NIH) is providing $2.2 million for development of three innovative co-robots, which are robotic devices designed to work cooperatively with humans. Two of the devices in development are aimed at improving quality of life for individuals affected by disabilities.
Of the three projects, the device referred to in an NIH media release dubbed the “Smart Walker” will be of importance to the rehabilitation industry. This project is led by Xiangrong Shen, PhD, associate professor, department of mechanical engineering, University of Alabama, Tuscaloosa, and strives to provide a product that will increase mobility for the elderly. The robot is designed to have four legs and operate in two modes.
One mode, “smart power-assist walker,” allows the user to operate the device from within and choose the amount of powered assistance necessary. The second mode, “smart mule,” enables the robot to walk at the user’s side while carrying some type of load. Common applications could include carrying groceries, laundry, or other common tasks associated with errands inside or outside the home.
The robot has two modes: smart power-assist walker and smart mule. In the smart power-assist walker mode, the user is situated within the robot and chooses the amount of powered assistance that is needed. In the smart mule mode, the robot walks alongside the user while carrying a load—for example, groceries. The robot uses a 3D computer vision-based sensing system to detect the user’s motion and the environment. With its smart legs, the robot is able to easily overcome environmental obstacles in ways that powered wheelchairs cannot.
By leveraging the design features of “smart legs,” the robot is engineered to easily overcome environmental obstacles in ways powered mobility devices cannot. The robot also reportedly uses a 3D computer vision-based sensing system to detect the user’s motion and the environment.
“When the general public thinks about the research that NIH supports, they don’t usually imagine robots. But robots have a tremendous potential to contribute to the health and well-being of our society, whether they are helping an elderly person engage in physical activity or promoting the curiosity of a child,” said Grace Peng, PhD, program director of Rehabilitation Engineering at the National Institute of Biomedical Imaging and Bioengineering, part of NIH.
According to the NIH media release, the goal of the smart walker is to help the elderly remain physically active and enjoy a healthier life with reduced reliance on the assistance of caregivers or expensive home renovations.
Development of a third robot the NIH is underwriting is designed to serve as a social companion for children. According to a media release from the NIH, the device is intended to inspire curiosity and teach the importance of hard work and determination.
[Source: National Institutes of Health] 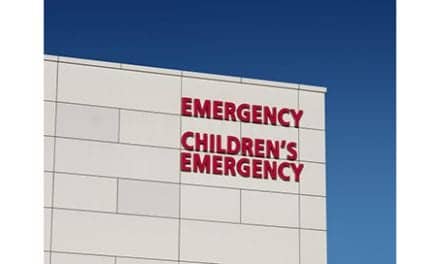