Researchers from the Kennedy Krieger Institute and Johns Hopkins University School of Medicine, both based in Baltimore, have collaborated to uncover insights into the neurological basis of autism, says a statement released by Kennedy Krieger. The new study, published in the journal Nature Neuroscience, examines patterns of movement as children with autism and typically developing children learned to control a novel tool.

The findings suggest that children with autism appear to learn new actions differently than do typically developing children, says the statement. As compared to their typically developing peers, children with autism relied much more on their own internal sense of body position (proprioception), rather than visual information coming from the external world to learn new patterns of movement, says the statement. Researchers also found that the greater the reliance on proprioception, the greater the child’s impairment in social skills, motor skills, and imitation, the statement says.

Previous research has shown that children with autism have difficulty with motor skills, which appears to be associated with abnormalities in how the brain learns motor actions, according to the statement. To study the models formed in the brain when children with autism learn a new movement, researchers measured patterns of generalization as 14 children with autism and 13 typically developing children learned to reach using a novel tool, says the statement. They then examined how well children were able to generalize what they learned in two separate ways—one that detected how much they relied on visual information to guide learning, and one that detected how much they relied on proprioceptive information to guide learning.

Stewart H. Mostofsky, MD, study author and a pediatric neurologist in the Department of Developmental Cognitive Neurology at Kennedy Krieger said in the statement that the findings can lead to important advances in methods for treating autism. Applying the knowledge gained in the study, targeted interventions can be developed that enhance visuo-motor associations in children with autism as they learn new skills, he noted, adding that, if done early enough, this could help to improve development of motor, social, and communicative skills in children with autism. He notes that it could also improve their ability to understand social cues, because the brain systems critical to forming internal models of behavior that guide our actions are also critical to developing an understanding of the meaning of those actions.

The study findings also provide support for observations from previous studies suggesting that autism may be associated with abnormalities in the wiring of the brain; specifically, with overdevelopment of short-range white matter connections between neighboring brain regions and underdevelopment of longer distance connections between distant brain regions, according to the statement. The study’s findings are consistent with this pattern of abnormal connectivity, as the brain regions involved in proprioception are closely linked to motor areas, while visual-motor processing depends on more distant connections, the statement says.

Reza Shadmehr, PhD, senior study author and professor of biomedical engineering and neuroscience at the John Hopkins University School of Medicine, said in the statement that these findings demonstrate why children with autism have difficulty learning motor skills and provide insight into why these children have difficulty learning to interact with the world around them.

Potential next steps include the use of neuroimaging to investigate whether or not proprioceptive versus visual feedback is actually associated with abnormal patterns of structural and functional connectivity in the brain of children with autism, says the statement. Additionally, researchers may study if patterns of motor learning can be altered to increase visual connections in specific regions of the brain. Through interventions such as cortical stimulation, biofeedback, and behavioral approaches, researchers are looking to investigate if there is an improvement in children with autism’s ability to rely on visual input to guide how they learn a range of behavioral skills, according to the statement.

The research was funded by grants from the National Alliance for Autism Research/Autism Speaks, the National Institutes of Health, and the Johns Hopkins University School of Medicine Institute for Clinical and Translational Research. 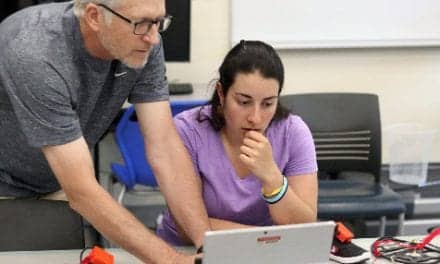