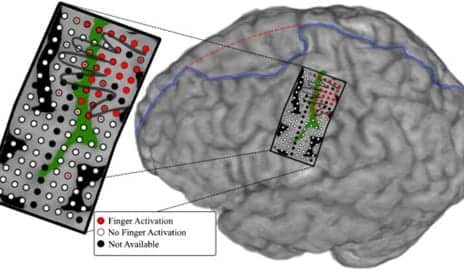 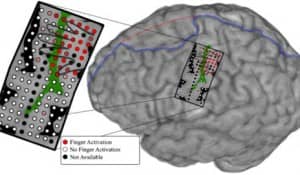 An illustration showing the electrode array on the subject’s brain, including a representation of what part of the brain controls each finger. (Photo courtesy of Guy Hotson.)

Researchers from Johns Hopkins University announce what is reportedly the first successful effort to help a patient move fingers individually and independently from one another using a mind-controlled limb.

“We believe this is the first time a person using a mind-controlled prosthesis has immediately performed individual digit movements without extensive training,” says senior author Nathan Crone, MD, professor of neurology at the Johns Hopkins University School of Medicine, in a media release from Johns Hopkins Medicine. “This technology goes beyond available prostheses, in which the artificial digits, or fingers, moved as a single unit to make a grabbing motion, like one used to grip a tennis ball.”

The patient on whom the experiment was performed was not missing an arm or hand. Rather, the prosthetic device—developed by the Johns Hopkins University Applied Physics Laboratory—used a brain-mapping procedure to bypass control of the patient’s arm and hand.

The patient, an epileptic, was already scheduled to undergo brain mapping at The Johns Hopkins Hospital’s Epilepsy Monitoring Unit to pinpoint the origin of his seizures, per the release.

As explained in the literature published recently in Journal of Neural Engineering, prior to connecting the prosthesis, the researchers mapped and tracked the specific parts of the subject’s brain responsible for moving each finger, then programmed the prosthesis to move the corresponding finger.

In order to map the patient’s brain, the patient’s neurosurgeon first placed an array of 128 electrode sensors on the part of the man’s brain that normally controls hand and arm movements.

Then, after the patient moved individual fingers on command, a computer program the researchers developed recorded which parts of the brain the “lit up” when each sensor detected an electric signal.

After the motor and sensory data were collected, the researchers programmed the prosthetic arm to move corresponding fingers based on which part of the brain was active. The researchers turned on the prosthetic arm, which was wired to the patient through the brain electrodes, and asked the subject to “think” about individually moving thumb, index, middle, ring and pinkie fingers. The electrical activity generated in the brain moved the fingers, the release explains.

“The electrodes used to measure brain activity in this study gave us better resolution of a large region of cortex than anything we’ve used before and allowed for more precise spatial mapping in the brain,” says Guy Hotson, graduate student and lead author of the study, in the release. “This precision is what allowed us to separate the control of individual fingers.”

Initially, the mind-controlled limb had an accuracy of 76%. Once the researchers coupled the ring and pinkie fingers together, the accuracy increased to 88%, per the release.

Crone cautions in the release that application of this technology to amputees is still some years off and will be costly, requiring extensive mapping and computer programming. 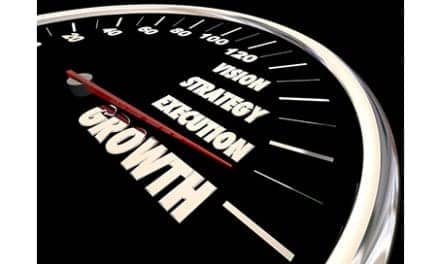 National Seating & Mobility Expands Its Reach Into Ohio and Washington