To get relief from fibromyalgia pain, more and more people are trying alternative treatments. It’s often instinctive—putting an icepack on a painful spot or reaching for the heating pad when muscles hurt. Or it feels good—like a massage. Even acupuncture is becoming a mainstream pain treatment, with endorsements from the NIH and the World Health Organization.

Now, researchers are honing in on how these various home remedies and alternative treatments work, according to an article on WebMD.

"In all these therapies, we’re stimulating pressure points … we think there may be a similar underlying mechanism in how they work," says Tiffany Field, PhD, director of the Touch Research Institute at the University of Miami School of Medicine.

Pressure applied to the right spot triggers all sorts of changes in the body—in a good way, she says. The pressure points have nerve connections to major nerves in the body that affect physiological processes.”

This reduces flow of stress hormones and pain-inducing chemicals—and ramps up production of mood-related brain chemicals such as serotonin, she says. The result: The body slows down, you feel calmer, sleep is more restful—and you are able to tolerate the pain of fibromyalgia better.

For the past three decades, Field has conducted more than 80 studies looking at massage’s effects on various conditions. Her research team looks deeply at the underlying physiological processes involved in sleep—especially as it relates to fibromyalgia pain.

Researchers tracked patients’ sleep patterns, also measuring "substance P," a brain chemical that is central to fibromyalgia pain. People with fibromyalgia pain have higher levels of substance P in the spinal fluid. They also have lower-than-normal levels of mood-boosting serotonin.

When they get a massage, all of that changes. Field’s studies have shown less substance P in patients’ saliva—and they report less pain. They also have fewer painful tender points.

The studies typically involve 20-minute massages—which is only practical if a significant other is trained to do it, she says. One bonus for the family masseuse: People who give massages have lower stress hormone levels, too.

To get the most benefit, it’s important to apply moderate pressure. "It doesn’t matter whether you’re rubbing, kneading, or stroking—it’s the pressure that makes the difference," Field says. "You have to move the skin, actually see finger indentations in the skin. It doesn’t hurt, but it’s more than light stroking. We’ve found that light stroking doesn’t help."

Massage also helps relieve depression, Field adds. "Depression is related to low serotonin, low dopamine, and increased cortisol. We can jazz that up with massage. There are a lot of positive benefits from massage."

Studies show that acupuncture can have dramatic effects on a person’s EEG, blood flow, and breathing rate. Acupuncture has also been linked to the production of endorphins (natural opiates) as well as brain chemicals, including serotonin and cortisol.

"In acupuncture, they’re stimulating pressure points, just as we do with massage," Field says.

In one study, fibromyalgia patients got six acupuncture treatments over a 2- to 3-week period. Compared to patients who got fake treatments, the acupuncture patients had less fatigue and fewer anxiety symptoms 1 month after treatment compared to the "fake" acupuncture group.

Acupressure is another alternative treatment that can help ease fibromyalgia symptoms. Acupressure involves finger pressure rather than needles, but works on the same meridians and chi points as acupuncture. People who don’t like needles often choose acupressure over acupuncture.

Warm baths, ice packs, and pressure are the tried-and-true home remedies for many ailments. You burn yourself—you immediately apply ice or hold it under cold water. Your joints hurt, you want moist heat. You hit your elbow, you’re inclined to grab it.

There’s a scientific reason why we instinctively do these things. "Temperature and pressure are very, very similar in pain control," Field says.

They reduce inflammation and pain by stopping the pain signal, she explains. "It’s called the ‘gate theory of neurons.’ Temperature neurons and pressure neurons seem to be longer and more insulated than pain neurons. The more insulated the neuron is, the faster the message is going to travel."

Apply cold water, moist heat, or pressure—and it closes the gate to the next signal, which is the pain signal. "Temperature and pressure neurons travel faster than pain neurons," says Field. "They’re protective."

Rub painful trigger points with a hard object (like a tennis ball or dowel rod). It’s called self-massage, and it is very effective, she says. "People rub their arms and face with the tennis ball. They use a dowel rod on their legs. They’re stimulating the pressure receptors, which helps end the pain. It works—and it’s something people can do on their own." 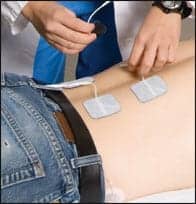