Telerehab vs In-Clinic: Which One Wins the Post-Stroke Arm Weakness Battle? 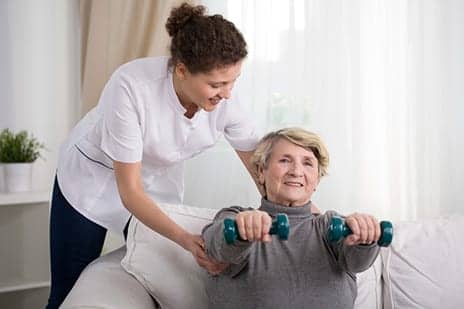 Telerehabilitation was not inferior to in-clinic rehabilitation therapy in helping to improve arm function after stroke but could substantially increase access to therapy for those who are unable to access a rehabilitation clinic, researchers opine.

“Few patients fully recover from arm weakness after a stroke. The remainder demonstrate persistent arm impairments that are directly linked to activity limitations, participation restrictions, reduced quality of life, and decreased well-being,” Steven C. Cramer, MD, from the department of neurology at the University of California, Irvine, and colleagues write, in a study published in JAMA Neurology.

“Some rehabilitation therapies can improve these deficits, with higher doses associated with better outcomes. However, many patients do not receive high doses of rehabilitation therapy, for reasons that include cost, difficulty traveling to the location where therapy is provided, shortage of regional rehabilitation care, and poor adherence with assignments,” they continue, in a media release from Healio.

Cramer and colleagues conducted a randomized, assessor-blinded, noninferiority clinical trial to compare telerehabilitation and in-clinic rehabilitation therapy outcomes for patients who had a stroke that resulted in arm motor deficit.

Patients were enrolled in the study at 4 to 36 weeks after experiencing an ischemic stroke or intracerebral hemorrhage that resulted in arm weakness. After enrollment, participants were randomly assigned to receive intensive arm motor therapy in a rehabilitation clinic or in their home using telerehabilitation delivery services with a computer connected to the internet. Scores on the Fugl-Myer arm motor scale were measured at the baseline and after treatment to determine changes in arm motor function.

All patients received 36 treatment sessions (70 minutes) in a 6- to 8-week period, which included 18 supervised and 18 unsupervised sessions. The content of therapy was carefully matched, with each group using the same exercises and standard exercise equipment.

A total of 124 participants were included in the study. Participants had a mean age of 61 years, a mean baseline Fugl-Meyer score of 43 points and were enrolled for a mean 18.7 weeks following stroke, the release explains.

Both groups experienced significant changes in Fugl-Meyer scores from the baseline period to 30 days after treatment, with a mean change of 8.36 points in patients who received in-clinic therapy and 7.86 points in those who received telerehabilitation therapy.

The noninferiority margin was 2.47 and fell outside the 95% confidence interval, suggesting that telerehabilitation was not inferior to in-clinic therapy.

“Our study found that a 6-week course of daily home-based [telerehabilitation] is safe, is rated favorably by patients, is associated with excellent treatment adherence, and produces substantial gains in arm function that were not inferior to dose-matched interventions delivered in the clinic,” Cramer and colleagues conclude, in the release.