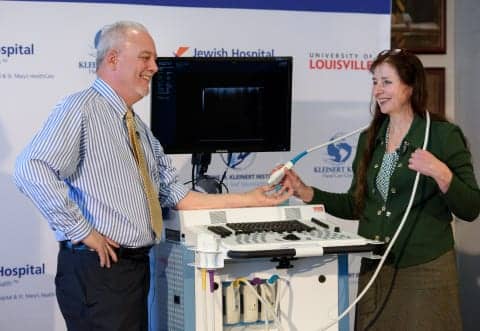 Matthew Scott, the recipient of reportedly the world’s most successful hand transplant and the first person in the United States to receive a hand transplant, recently celebrated the 20th anniversary of the history-making procedure.

Scott received his new left hand during a procedure performed on January 24 and 25, 1999. The 14 ½ hour-long procedure required 18 medical professionals and was performed at Jewish Hospital, part of KentuckyOne Health, by surgeons from Kleinert Kutz Hand Care Center and Christine M. Kleinert Institute for Hand and Microsurgery. The transplant was part of the Louisville Vascularized Composite Allograft program (Louisville VCA Program).

The Louisville VCA program was started to prove that the transfer of a hand and/or arm could be a treatment alternative for patients who had lost a limb in the same way a kidney or heart can be replaced in patients who need a new organ. Unlike solid organ transplants, hand transplants require the reconnection of multiple tissues, including skin, muscle, bone, tendon, and more.

Some controversy has surrounded this type of transplantation because the procedure requires otherwise healthy patients to take immunosuppressant drugs, making them more vulnerable to diabetes, cancer and other diseases, a media release from KentuckyOne Health explains.

“We cannot overstate how gratifying it is to reach this milestone with Matt,” says Christopher Jones, MD, Lead Transplantation Physician, Jewish Hospital Transplantation Program Director, and Transplant Surgery Division Chief at University of Louisville Physicians – Transplantation Surgery and the UofL School of Medicine, in the release.

“Not only has Matt’s life been immeasurably enriched through this procedure, but his dedication to keeping his new limb healthy has allowed us to prove that this type of transplantation can be successful, and has paved the way for others to receive this life-changing procedure.”

A New Jersey native, Scott is the director of the EMT and paramedic school operated by his employer, Virtua Health. The 57-year-old father of two can use his transplanted hand for everyday living activities, such as dialing a phone, drinking from a glass, turning door knobs, and more.

Scott lost his dominant left hand on December 23, 1985, in a blast from an M80 firecracker accident.

“I am fortunate to have been part of this historic surgery and witnessed Matt’s progress over the last 20 years. He has paved the way for other hand transplants and inspired me every step of the way,” states Tuna Ozyurekoglu, MD, Lead Reconstructive Surgeon; President, Christine M. Kleinert Institute; Partner, Kleinert Kutz Hand Care Center.

“The functionality of his hand today is a result of his amazingly positive attitude, compliance with medical advice and the continued dedication of this hand care team.”

Since the surgery, Matt has become an ambassador for hand transplantation, and has dedicated his time to meeting with potential transplant recipients and speaking at medical and amputee conferences, and is a member of the United Network for Organ Sharing VCA committee, the release continues.

“I was fully aware of the risks of the surgery back then, but I don’t think I grasped just how my new hand would change my life, and by extension, the lives of the hundreds of other patients and their families,” Scott shares. “I will be forever grateful for what that team of surgeons, nurses, therapists, orthotists, pharmacists, and so many others did for me, and for the way their innovation and professionalism continues to resonate around the world.”

Since Scott’s procedure in 1999, 200 hand transplantations have been performed on more than 140 patients worldwide, per the release.