Vanderbilt University researchers, Nashville, Tenn, are reportedly leading an international clinical trial geared toward assessing the functional benefits of a combined therapy designed to treat acute ischemic stroke. According to a recent news release, the THERAPY trial encompasses the use of tissue plasminogen activator (tPA) and an interventional device treatment called the Penumbra System. The FDA-approved system is engineered to suction away blood clots to restore blood flow to the brain’s affected area.

Researchers note that the trial will evaluate a blended therapy using IV tPA and interventional clot removal with the Penumbra System, comparing the results to those of IV tPA treatment alone. During the procedure, a catheter is threaded to the clot and the Penumbra System is used to gently suction away the mass to restore blood flow.

The trial’s principal investigator, J Mocco, MD, associate professor of neurological surgery, explains the device’s role, “The device evaluated in this trial works like a straw, it literally sucks the clot out. In our recent experience at Vanderbilt, almost half of the treated patients are completely independent afterwards,” Mocco says.

The trial also aims to investigate the use of specific patient selection criteria in order to pinpoint if interventional therapy is appropriate, the release notes. “If successful, the THERAPY trial will help to identify a patient population most likely to benefit from interventional therapy, as well as reveal a treatment paradigm that may have a true impact on improving standard of care for ischemic stroke patients,” Mocco says. 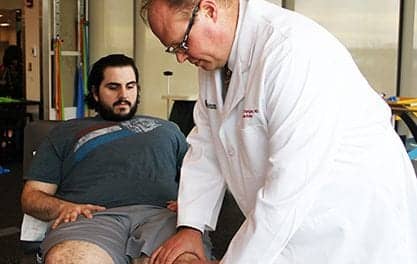