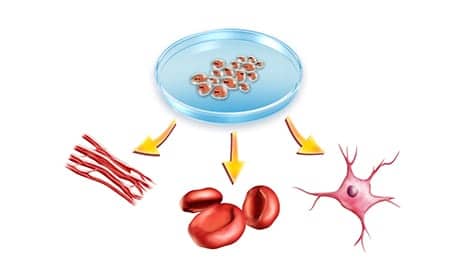 A study from Tufts University suggests that skin cells from diabetic foot ulcers can be reprogrammed as pluripotent stem cells to help treat chronic wounds.

The study is published online in advance of print in Cellular Reprogramming. A second study, which suggests that a protein called fibronectin is linked to a break-down in the wound-healing process in cells from diabetic foot ulcers, is published in Wound Repair and Regeneration.

“By pushing these diabetic wound cells back to this earliest, embryonic stage of development, we have ‘rebooted’ them to a new starting point to hopefully make them into specific cell types that can heal wounds in patients suffering from non-healing wounds,” he adds.

In the first study, the research team—from Tufts University School of Dental Medicine and the Sackler School of Graduate Biomedical Sciences at Tufts—reprogrammed the diabetic foot cells into an embryonic-like state and turned them into cell types that are important in wound healing. Then, using three independent criteria, they confirmed that the cells have been reprogrammed into pluripotent stem cells, per the release.

In the second study, the research team created 3D-engineered tissues found to mimic many features of chronic wounds, and used them to test the properties of the cells from the diabetic foot ulcers. They observed that the cells get stuck making an immature scaffold made up predominantly of a protein called fibronectin that is likely to prevent proper closure of wounds.

“The findings advance commonly held assumptions about how diabetic foot ulcers develop. Most importantly, our ability to reprogram these cells gives us new treatment avenues to pursue,” states Garlick in the release.