In a study recently published in the Journal of Child Psychology and Psychiatry, researchers from the Kennedy Krieger Institute, Baltimore, found that early intervention can improve the core symptoms of autism spectrum disorders (ASD) in very young children.

This is the first randomized clinical trial measuring how a group-based early intervention model impacts social development in toddlers with ASD, according to the researchers. The most significant improvements were found in how the children connected and socialized with others.

The development of group-based, empirically-validated intervention models is critical to increasing access to autism services for toddlers because they are more easily and affordably replicated than intensive one-on-one intervention models. Group-based interventions also offer children with autism more opportunities for social interaction. Because early social development is a major predictor of outcomes for children with ASD, the researchers at Kennedy Krieger aimed to improve social and communication skills through a comprehensive, behavioral intervention program targeting social development.

“We placed a heavy focus on the ability of toddlers to pay attention to other people’s actions and communication behaviors and prepare them to respond and initiate with others in socially appropriate ways,” said Rebecca Landa, PhD, CCC-SLP, lead study author and director of Kennedy Krieger’s Center for Autism and Related Disorders. “This is critically important because it opens the door to ongoing learning opportunities for toddlers with ASD. When toddlers are attuned to people, people are more motivated to stay engaged with them. The ability to connect with peers through imitation can open the door to acceptance and being chosen as a playmate in the classroom or on the playground, for example.”

Participants included two groups of 24 toddlers with ASD, ages 21 to 33 months, who received identical intervention for 6 months. However, one group received a greater number of orchestrated opportunities for social engagement.

Researchers found that intervention led to improvements in both groups. However, the most significant finding was that the children who received more of the socially-directed intervention developed greater socially engaged imitation, which increased from 17% of imitated acts being paired with eye contact to 42%. This skill was generalized and maintained through the 6-month follow-up.

Researchers are hopeful that the group-based socially-directed early intervention model can achieve similar social skills gains in older children. Kennedy Krieger researchers have applied for funding to adapt the intervention for preschoolers.

After the completion of this research study, the Maryland State Department of Education and Baltimore City Infants and Toddlers partnered with Kennedy Krieger Institute’s Center for Autism and Related Disorders to provide training in the implementation of the Early Achievements intervention model to public school teachers and therapists who work with young children with ASD.

ASD is the nation’s fastest growing developmental disorder, with current incidence rates estimated at 1 in 110 children. 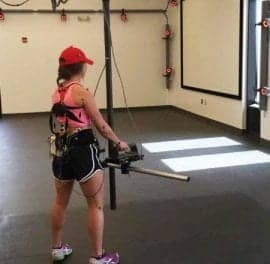 Pushing Wheelchairs With Too Much Force is Common, Especially Among Men