When Wounds Are Hard to Heal 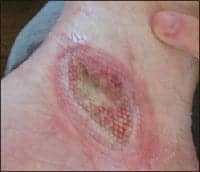 For Tamara Fishman, MD, when it comes to treating wounds, the best way is the old-fashioned way. A podiatrist, Fishman sees patients with ulcers on their feet and legs, and, as one might expect, about 75% of her cases are diabetes-related. At her Primary Foot Care Center in Miami, Fla, Fishman makes patient management her highest priority, and a complete and accurate past and present medical history is the first crucial step in treating wounds, especially those of the problem, chronic variety. “I take the patient’s history myself, I don’t use any assistants. First is their overall medical history, then the history of the wound. A low hemoglobin level, for instance, indicates circulation problems. What specialists have they seen? What treatments have been tried and failed? Why are they slow-healing and chronic? You have to know who your patient is,” Fishman says.

Rather than follow evidence-based protocol, Fishman prefers to rely, first and foremost, on her own judgment. “There are multiple options in dealing with wounds. First, of course, you look at it. Does it appear infected? Is it red, hot, odorous or draining? Does it need debridement (cleaning away of necrotic tissue)? What about systemic factors—does the patient have nausea, chills, or shakes?” Fishman notes.

It is not easy, says Fishman, to determine if a wound is infected. Contamination is not the same as infection, nor does it necessarily lead to infection. “All wounds are contaminated,” says Fishman. “If you grow a culture from a wound, there’s going to be a bug of some kind. But that doesn’t mean it’s infected. It takes a lot of experience and skill to know if there is infection. A contaminated wound can be healed, an infected wound cannot.”

One of Fishman’s patients represents a classic example of how a wound can be chronic without being infected: A 45-year old woman has a wound on her ankle that heals but then reopens a week or two later. The wound is now just 2 centimeters wide, but it has been as large as 10 centimeters. What is the etiology of the wound? The woman has edema in her ankles and feet caused by blood clots in her legs. The blood clots are inoperable. The edema puts pressure on her skin and causes it to rupture into wounds. She has to wear compression stockings to control the edema. When she does so, the wounds don’t occur because the swelling is not sufficient to cause a break in the skin. “But this patient is not compliant,” explains Fishman. “She doesn’t wear the stockings as regularly as she should. So in this case the chronicity of the wound is caused by the patient not doing what she’s supposed to be doing. You have to establish the etiology of the wound. The wound is caused by the edema, which can be controlled by the patient. The patient keeps returning for treatment, but must learn to take better care of herself.”

Although Fishman likes to rely on her own judgment on a case-by-case basis, she doesn’t hesitate to turn to other doctors when she feels that additional help is necessary. In the case of the woman with the foot wound, Fishman referred her to a vascular specialist who determined that she had the blood clots. “Doctors should not be afraid to refer patients out to multidisciplinary teams. A team approach is essential in treating hard to heal wounds. Of course, you need to know that the patient’s insurance will cover the other doctors involved.”

Although Fishman is not one to strictly adhere to evidence-based protocol—”I never followed a pathway”—she does give it credence for providing guidelines. “I do attend to the basics that are always part of an evidence-based approach, such as checking for infection, circulation problems, debridement, and so on.” But that’s where it ends for Fishman, because “every wound doesn’t fit every algorithm. There’s a person attached to the wound who has lifestyle issues, financial issues, social and behavioral issues, and, of course, physical issues. One plus one doesn’t always equal two,” she says.

Fishman puts patient compliance and a team approach at the top of her list for success in treating wounds. “Compliance is the number one factor in dealing with diabetic foot patients. It’s huge because of other issues that are often involved, such as circulatory problems, neurological problems, high blood pressure, and heart conditions. You need a commitment from the patient to do their part. Otherwise, it can be very frustrating because without the patient’s cooperation, the wound can be very hard to heal,” Fishman says.

Even with compliance and the help of specialists like vascular doctors, infectious disease doctors, nutritionists, and psychologists, sometimes the result is not good. “About 5% to 6% of cases end in amputation or death. Even the best of treatment can be ineffective in some cases.”

Fishman uses products like topical medicines and a vacuum-assisted closure device to help in wound healing. She believes that keeping the wound bed moist with exudate is essential to promote healing. These devices assist in creating an optimal environment for healing, according Fishman.

“But medical management of patients is paramount,” she adds.

Another practitioner who gets close to foot wounds, perhaps even a bit too close for comfort, is physical therapist Ginny Paleg, MS, PT. Pelag’s husband, Brad Paleg, an educator and distance learning specialist, fractured his foot in a fall. About 2 weeks after a second surgery to repair ligaments, an open wound appeared on the inside of his right ankle. The wound was approximately 3 inches by 4 inches, and up to 3/4 inches deep. Unsure of what caused the wound, Brad Paleg was told that it “could have been an air pocket, or pocket of gel from the first surgery [to repair the fractures] that flared up after a second surgery.” However, Ginny Paleg says she believes that the wound occurred when the surgical incision opened as a result of excessive bleeding into the leg. (Her husband defers to her medical expertise in this matter.)

Whatever the cause, the wound necessitated yet another surgery for debridement, and this, says Brad, left him with “a clean, oval-shaped hole,” which then allowed for the use of a vacuum-assisted closure device.

Also known as a negative pressure pump, the vacuum-assisted closure device is a portable programmable pump that applies a subatmospheric pressure to the wound, resulting in the suctioning off of edemic fluid, thus hastening the healing process. An open-cell polyurethane or polyvinyl alcohol foam dressing is packed into the wound cavity so that the foam contacts the entire base, sidewalls, and undermined and tunneled surfaces. The dressing is then secured in the wound by covering it with a semiocclusive polyurethane film drape that is supplied with the device.

The suction effect of the device is exerted on the foam dressing via a polyvinyl tube that is inserted into the foam. The opposite end of the tube is connected to another tube that leads to a 300 cc canister, which collects the fluid drawn from the wound tissue.

Brad needed another surgery, this time a graft to aid in rejuvenating the tissue surrounding the wound, and with the help of the vacuum-assisted closure device and a nurse who visited two or three times a week to replace the tubes and dressing, his wound was steadily healed over the next 2 to 3 months. A final operation removed the pins and screws that had been inserted in his tibia and fibula during the initial surgery.

He was recently fitted for a foot orthotic, still has some pain in the ankle, but can now walk normally, “if somewhat gingerly,” and gets adequate exercise by walking his dog every day.

Alan Ruskin is a staff writer for Rehab Management. For more information, contact .