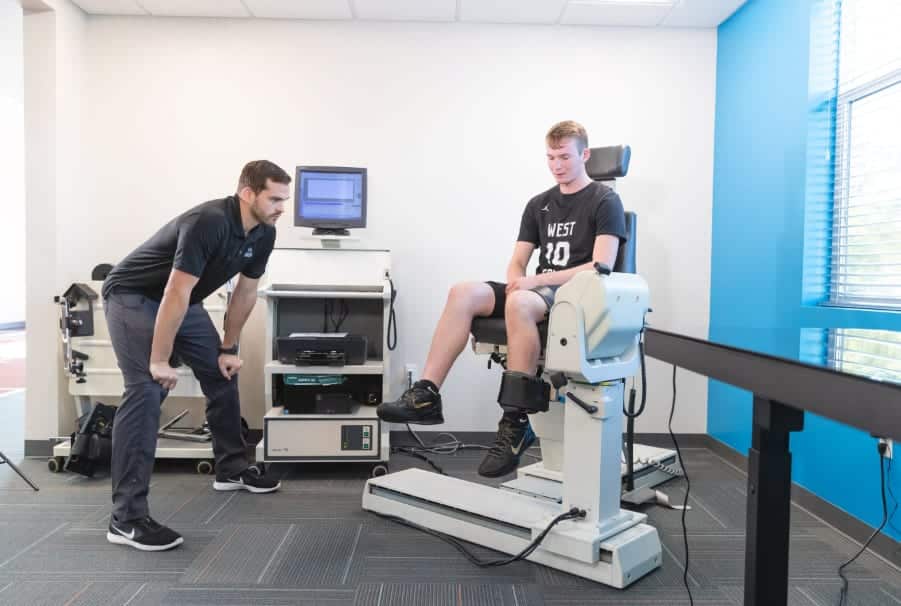 Photo above: With a customized setup that is specific to an athlete’s anthropometrics, isokinetic testing can precisely determine any difference in power-output between two limbs. Shoulders, hips, knees, ankles. A limb-symmetry index (LSI) is a critical output determining return to play after injury or surgery.

I’ve been a PT for nearly 30 years and private practice owner for more than 15 years. I am driven by my patient contact and community needs. I write articles, lecture, and mentor other therapists because I love to innovate. In 2015, as the owner of an already successful private PT practice with three distinct locations in orthopedics, geriatrics, and neurology, I had a dream to go further and provide more. Today, nearly 5 years later, I realized that dream in The RE_Building, located in Salem, Oregon. The RE_Building is a reality-come-true of a vision to elevate the practice of PT using engaged clinicians performing relationship-based one-on-one PT, state-of-the-art technology, multidisciplinary collaboration, and a proven business model.

The RE_Building, aptly named for its prefixes and root-word contents, was created to have exceptional design and function. I named the building a full 20 months before construction started, while on a run before a presentation I gave in Auckland, New Zealand. Return, rehabilitate, realign, refresh, re-envision, relax, reshape, and recover are just a few of the words describing the multidisciplinary services located within, all provided by sports-focused if not credentialed and certified experts in their respective professions of physical therapy, chiropractic, massage, acupuncture, sports vision, nutrition, orthopedic medicine, and more. Local architects CBTwo Architecture have designed and built all three of my practice’s locations: Northwest Rehabilitation Associates (NWRA), in 2009, 2014, and now 2019.

Northwest Rehabilitation Associates already had a regionally, if not nationally, recognized program in its Healthy Aging and Neurology program, which served as the roots of NWRA stemming back to 2004. Its successful orthopedic and wellness center was built and opened just one lot down, in 2014, due to growth in the practice built through word of mouth. The RE_Building (with spelling and underscore emphasizing the multiple root word combinations) was built to serve athletes of all ages, shapes, and sizes, with the latest in sports science, to objectify and maximize human performance. Salem, the capital of Oregon with a population of just under 200,000, did not have such resources for local athletes to analyze and improve their resources in strength, power, endurance, and biomechanics, until now.

Most importantly, people who wanted to perform better, age better, and move better did not know two critical things: What am I capable of (what are my strengths), and is more movement better. Running with poor form or without sufficient strength can be just as injurious as poor technique in box jumps and pitching. More is not better if more becomes cumulative trauma. We needed better technology in the hands of movement scientists.

The RE_Building was built and funded on a practice that grew from quality healthcare. Consistent PT-patient scheduling with limited movement from one PT to another; limited use of support staffing; and limited marketing expenses. NWRA built a practice based on reputation, providing healthcare through listening, innovating, giving back to the community, and listening again.

I’m an active PT in the APTA and OPTA, and regularly give and receive mentoring. I visited model practices owned by Dr Chris Powers, PT, PhD, and talked with others along the way, including Kevin Vandi, PT, DPT, of Comp Edge PT in San Jose, Calif, and Chris Bailey, PT, from Twin Cities Orthopedics, to fashion something that is a function of what the community needs and my practice could afford. I used all of my networking resources to equip the building, staff the program, and synthesize this line of service. I am proud of what we have — but we are not resting.

There is no singular crown-jewel in The RE_Building. Athletes are actively engaged in each corner, according to their needs. The two side-by-side underwater treadmills (UWT) allow clients to exert and learn simultaneously, with low risk for impact or injury. They watch their movement from a lateral or anterior view, and learn from staff how to move better in recovery or redesign.

There are four distinct applications for the UWT in care of clients and patients:

A room in the mezzanine is whirring with hydro-resistant concentric power equipment in six different machines built for rowing, squats, overhead press, stair-climbing, ski-ergometer, and upper-body cycle/ergometry. These are exceptional machines that truly are built to develop power. In a fully concentric-based and safe movement, each of these devices is engineered to incentivize “Force x Velocity” — the equation for power. Athletes have the edge over a competitor not through strength, but through the combination of strength and speed, whether that be through the rate of force development or the velocity that force can be moved. Consider two 250-pound athletes going for a rebound that they both see and react to at the same time. Who gets the rebound? The one that can move their 250-pound frame to the ball the fastest, which is power.

Moving through the RE_Building, one observes a strong presence of cardio equipment for treadmill, specialized steppers, and upper body exercise. I outfitted all three of my clinics with a particular brand for its durability in the athletic population equally as much as the adaptability and volume that they are used in the Healthy Aging and Neurology program. Specifically in The RE_Building, NWRA chose the brand’s upper body ergometer, a durable and versatile treadmill, upright bike, and lateral stability trainer.

Revolutionary in the world of athletic performance is the consideration of impact-free eccentric lower extremity and core training. Gone are the days that an athlete must participate in the literal grind of plyometric box jumps to develop muscle mass, time under tension, and responsive forces when the feet hit the ground. The rapid eccentric anaerobic core trainer purchased for the RE_Building removes the hundreds of repetitions that your knees will regret for years and decades to come, using a moving eccentric platform and no impact whatsoever.

The resistance cable system is a unique feature, built at the start of the two-lane indoor-outdoor track that measures nearly 70 meters. This device can provide consistent resistance to the athlete with aspirations of powerful running for competitive (track, baseball, football, gymnastics, cheer, lacrosse, soccer), recreational (basketball, soccer, singles tennis), or health (wellness in aging) reasons. The resistance cable system is revolutionary. We use it to help athletes feel, promote, and see their gains in multidirectional functional power on foot. It is so versatile, consistent, reliable, and measurable that athletes of all sports can benefit from this device — as an assessment and training tool. While the most intuitive use of this device is for sprinting, the applications to the core and the upper extremity for both an overhead athlete or a stick-bat-or racket sport is underutilized. Testing and training arm speed/racket or bat speed are enough to justify a purchase of many different tools, but with the resistance cable system you already have it.

The power training options in The RE_Building do not stop at the concentric fluid power trainers and resistance cable system. A sophisticated and adaptable dynamometer is utilized for training in neuromuscular re-education and educating about the fatiguability within power training.

Life and sport are rarely lived in a straight line. Even the triathlete, who aims for a finish line in each — swimming, biking, and running — is most efficient when she can counter the wind, the current, and the uneven ground (controlling lateral forces) to propel efficiently forward. Countering lateral and rotational forces are very easy to see in the team sports (soccer, football, basketball); as well as racket/bat sports (lacrosse, tennis, baseball); and additionally the overhead athlete (pitching, serving, hitting in volleyball, field sports of javelin and discus, etc). To serve these athletes best, a set of resistance-based wall stations are employed accordingly. Each device serves a unique purpose for the therapist to train or re-train neuromuscular capacities and capabilities by introducing resistance at several points on the athlete participating in functional training.

The performance laboratory is a central feature of The RE_Building, providing a four-dimensional opportunity for therapists to establish a baseline, determine progress, or compare a client against either normative or contralateral data. The four data points come from very different quantifiers, each contributing a novel perspective to an analysis of biomechanics, power, and symmetry. The specific equipment includes the aforementioned dynamometer isokinetic data station, force plates; the instrumented treadmill; 9-channel surface EMG; and the 8-channel high-speed videography studio — all of which have integrated operation. These devices give The RE_Building a unique capacity to study, inform, and build treatment on both the quantity and quality of movement — by way of limb symmetry index scores, force vectors in running, cutting, jumping, and landing, as well as muscle activation/inactivation patterns.

As alluded in the title, The RE_Building includes synergies in patient care. Collaborations in performance and rehabilitation are not bidirectional, but multidirectional. We see athletes being analyzed at the examination station, receiving sport psychology intervention, participating in a sport-specific workout, and recovering with a massage. From an organized and intentional schedule, to a collaborative interdisciplinary session, and the convenience of both on-site refueling and recovery stations, the customer benefits are palpable.

This program elevates both the bar for outpatient sports medicine featuring the physical therapist as a central anchor; and elevates the bar of what should be expected from the art of movement science and evidence in measurement. Accountability begets results and may have a common effect on both the provider and the client — to “raise their game.” RM 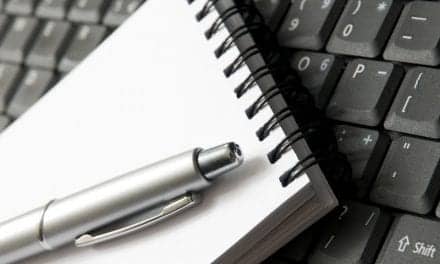 An interview with Carolina Facciani from Astra Tech 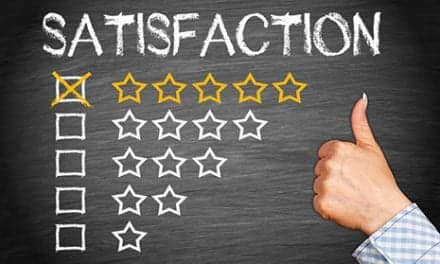