An article about the benefits and stability experienced by a Swedish arm amputee who receiveda prosthesis with a direct connection to bone, muscle, and nerve, in January 2013 has been published in the Science Translational Medicine journal.
Watch a video of the patient and prosthesis in action
Max Ortiz Catalan, leading author, research scientist, Chalmers University of Technology in Gothenburg, Sweden, emphasizes that the main contribution of the work is the ability to go “beyond the lab” to allow the patient to take on real-world challenges.
In a news story from the university, Ortiz Catalan, explains, “We have used osseointegration to create a long-term stable fusion between man and machine, where we have integrated them at different levels. The artificial arm is directly attached to the skeleton, thus providing mechanical stability. Then the human’s biological control system, that is nerves and muscles, is also interfaced to the machine’s control system via neuromuscular electrodes. This creates an intimate union between the body and the machine; between biology and mechatronics.”
The direct skeletal attachment is created by osseointegration, a technology that the release states was pioneered by associate professor Rikard Brånemark and colleagues at Sahlgrenska University Hospital. Brånemark led the surgical implantation and collaborated closely with Ortiz Catalan and professor Bo Håkansson, Chalmers University of Technology, on this project.
The story notes that the patient’s arm was amputated more than 10 years ago, and prior to surgery, his prosthesis was controlled through electrodes placed over the skin. The patient has a physical challenging job as a truck driver in northern Sweden and since surgery, the release says, and he has been able to cope with all the situations he has encountered; ranging from clamping his trailer load, operating machinery, to unpacking eggs, and tying his children’s skates.
According to the story, the patient is also one of the first in the world to participate in an effort to achieve long-term sensation through the prosthesis. Since the implant is a bidirectional interface, it can also be used to send signals in the opposite direction—from the prosthetic arm to the brain. In turn, this will be researchers’ next step; to clinically implement their findings on sensory feedback.
So far, researchers have been able to demonstrate that the patient has a long-term stable ability to perceive touch in different locations in the missing hand, Ortiz Catalan says.
The story reports that the researchers plan to treat additional patients with the novel technology later this year. Ortiz Catalan characterizes the technology as an “important step” towards more natural control of artificial limbs.
He also calls it the “missing link” for allowing sophisticated neural interfaces to control sophisticated prostheses. As of late, Ortiz Cataln says this has only been possible in short experiments within controlled environments.
The technology is based upon the osseointegrated prosthesis for the rehabilitation of amputees (Opra) treatment, in which a titanium implant is surgically inserted into the bone and becomes fixated to it by osseointegration. A percutaneous component is then attached to the titanium implant to serve as a metallic bone extension, where the prosthesis is then fixated, the story says. Electrodes implanted in the nerves and muscles act as interfaces to the biological control system. The electrodes record signals, which are then transmitted via the osseointegrated implant to the prostheses, where the signals are decoded and translated into motions.
The story states that the osseointegrated system was developed in close collaboration between Chalmers University of Technology, Sahlgrenska University Hospital, the University of Gothenburg, and Integrum. The research was also funded by Vinnova, Integrum, ALF (Region Västra Götaland), Conacyt, and Promobilia.
Photo Credit: Linda Bränvall and Martin Carlsson
Source: Chalmers University of Technology 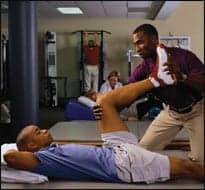 It Takes a Village

Improper Use of Snow Blowers Poses Risk of Finger Amputation